It's week 12 in the job interview and Donald Trump is anxious to tell Randal and Rebecca they are the final two. Randal looked completely blown away and Rebecca stifled a giggle. I think had her ankle not be broken, she would have happy danced all over that suite.

They were invited out to a celebration dinner with George and Carolyn where they were instructed to chose a team of three. There was some negotiating and coin tossing for the guys that both wanted as employees. Randal got Mark and Josh, with Rebecca choosing James and Chris. Carolyn almost choked on her Sushi when Rebecca said she wanted Torel on her team as well. Randal then picks Marshawn and I couldn't believe her name came up last rather than first on their choices. The teams are formed.

The Tasks:
Both of our candidates are given huge charity events to manage.
Randal is given a celebrity soft-ball game working with Outback Steakhouse to raise money for autism and Rebecca is to plan an event sponsored by Yahoo for pediatric AIDS.
Both teams get right to work and the "employees" are excited to be back to work for a win.

Things seem to be going pretty well at first.
Capital Edge meets with Joe Piscopo, who will be the MC for their event and Jake Glaser stops by the venue to speak with them about his mother and the charity. Man, that boy looks just like his Dad.
Exel meets with The Autism Speaks reps and Josh is surprised at the statistics. His wife is expecting a baby, he tells the group.

Things become more stressful when the teams meet with the corporate executives.
Outback wants to know about tents in case of inclement weather, Randal dismisses the notion.
Yahoo is grilling Rebecca about how donations will be requested, she listens and learns.

Now it is the day before the big events and Murphy's Law prevails.

Capital Edge is knocked off their chairs at a phone call from Joe Piscapo.
He can't make it.

Excel is way behind getting the ball park set up, Mark is trying to do it all himself.
Why didn't they hire a few dayworkers to set up those chairs?
And now there is rain in the forecast.
*booming thunder*
Posted by PJ at 12/09/2005 07:14:00 AM 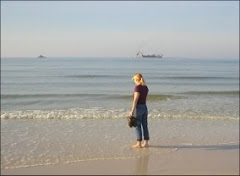